Two women died when their small plane crashed into an empty home in a luxury gated community in the hills of Northern California, relatives said Wednesday.

Mary Ellen Carlin of Pacific Grove was flying the plane Tuesday, and Alice Diane Emig of Rancho Cordova and her dog, Toby, were on board, Emig's family told Monterey Bay-area news station KSBW-TV.

The twin-engine Cessna 421 crashed into the home in the gated community about 5 miles (8 kilometers) from the city of Monterey shortly after departing from Monterey Regional Airport, according to the Federal Aviation Administration.

The crash sparked a fire in the house that spread to nearby bushes, but crews got it under control Tuesday.

Carlin, the owner of the plane and a flight instructor, was planning to fly Emig from Monterey to Mather in the Sacramento area, family told the TV station.

Relatives said deputies told them no one survived the crash.

Officials have not confirmed who was flying the plane, but Carlin's son, David Carlin,told the Monterey Herald that he has no doubt his mother was the pilot. 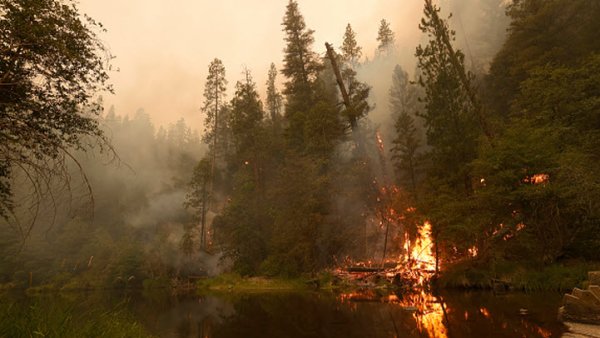 California's Largest Wildfire Flares But Within Line Crews Have Built

“My mom flew that plane for well over a decade,” he said. “I want to make sure everyone knows that my mom was a great pilot. She spent tens of thousands of hours flying. She taught dozens of students over the years. She’s kind of a legend.”

John Thornburg, spokesman for the Monterey County Sheriff’s Department, said no bodies have been recovered from the wreckage yet.

The National Transportation Safety Board is leading the investigation.