The 222-203, nearly party-line vote was an answer to the growing pressure Congress faces to address gun violence and white supremacist attacks — a crisis that escalated following two mass shootings over the weekend. Rep. Adam Kinzinger, R-Ill., a member of the congressional committee investigating the attack on the U.S. Capitol, was the lone Republican to vote in favor of the measure.

But the legislative effort by Democrats is not new. The House passed a similar measure in 2020 only to have it languish in the Senate. And since lawmakers lack the support in the Senate to move forward with any sort of gun-control legislation they see as necessary to stop mass shootings, Democrats are instead putting their efforts into a broader federal focus on domestic terrorism.

“We in Congress can’t stop the likes of (Fox News host) Tucker Carlson from spewing hateful, dangerous replacement theory ideology across the airwaves. Congress hasn’t been able to ban the sale of assault weapons. The Domestic Terrorism Prevention Act is what Congress can do this week to try to prevent future Buffalo shootings," Rep. Brad Schneider, D-Ill., who first introduced the measure in 2017, said on the House floor.

The measure seeks to prevent another attack like the one that took place in Buffalo on Saturday where police say an 18-year-old white man drove three hours to carry out a racist, livestreamed shooting rampage in a crowded supermarket. Ten people were killed, all of the victims Black. Buffalo Shooting Leaves Community Without Its Only Grocery Store 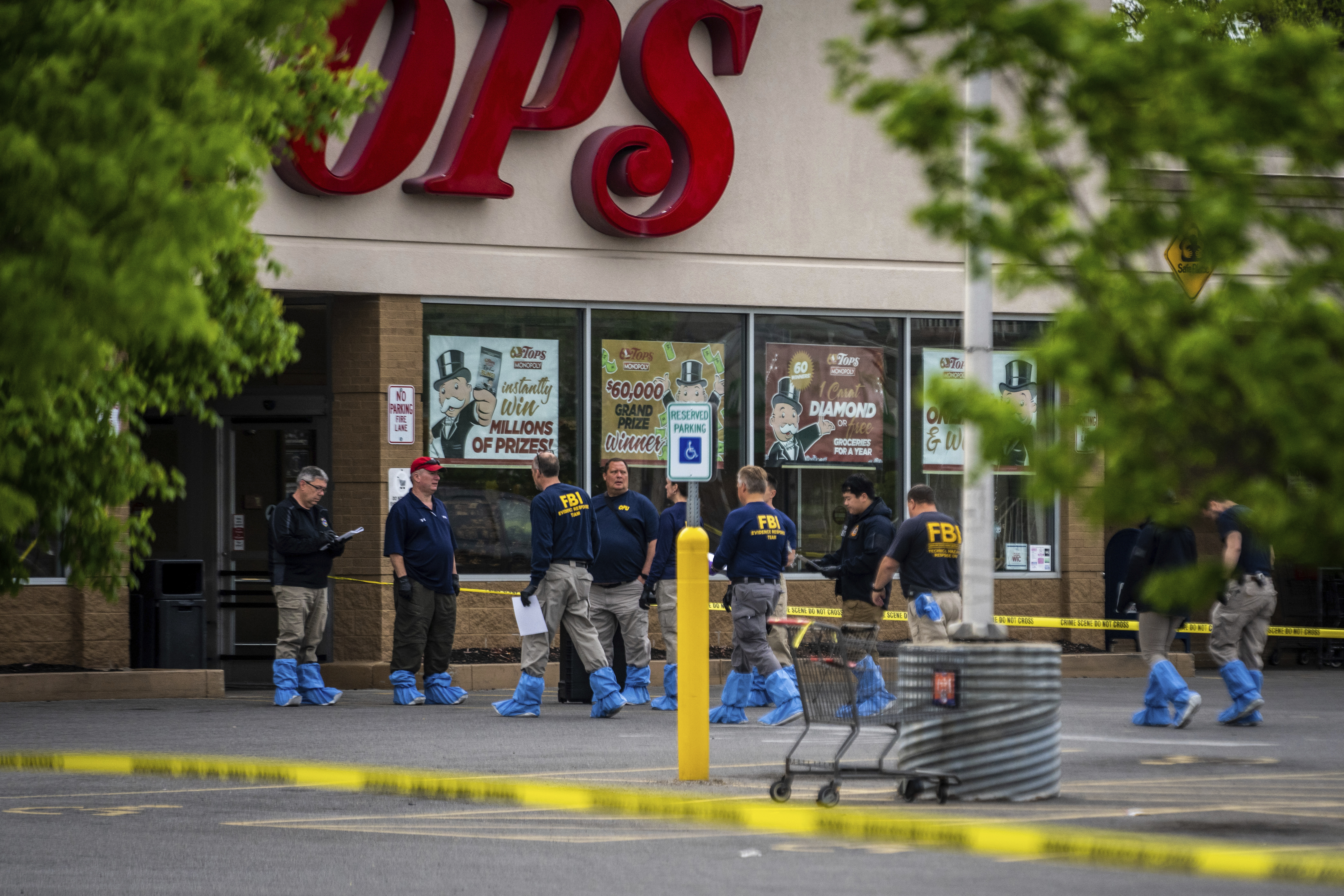 Supporters of the bill say it will fill the gaps in intelligence-sharing among the Justice Department, Department of Homeland Security and the FBI so that officials can better track and respond to the growing threat of white extremist terrorism.

Under current law, the three federal agencies already work to investigate, prevent and prosecute acts of domestic terrorism. But the bill would require each agency to open offices specifically dedicated to those tasks and create an interagency task force to combat the infiltration of white supremacy in the military.

The Congressional Budget Office estimates the bill would cost about $105 million over five years, with most of the money going toward hiring staff.

“As we took 9/11 seriously, we need to take this seriously. This is a domestic form of the same terrorism that killed the innocent people of New York City and now this assault in Buffalo and many other places,” said Sen. Dick Durbin, D-Ill., who is sponsoring an identical bill in the Senate.

Senate Democrats are pledging to bring up the bill for a vote next week. But its prospects are uncertain, with Republicans opposed to bolstering the power of the Justice Department in domestic surveillance.

President Joe Biden urged Congress to pass gun control measures after a gunman opened fire at a FedEx facility in Indianapolis, Ind., on Friday, killing 8 and injuring several others.

GOP lawmakers also say the bill doesn’t place enough emphasis on combatting domestic terrorism committed by groups on the far left. Under the bill, agencies would be required to produce a joint report every six months that assesses and quantifies domestic terrorism threats nationally, including threats posed by white supremacists and neo-Nazi groups.

“This bill glaringly ignores the persistent domestic terrorism threat from the radical left in this country and instead makes the assumption that it is all on the white and the right,” said Rep. Darrell Issa, R-Calif.

The divergence highlights the stubborn gap between Democrats and Republicans over domestic terrorism in the U.S. and how it should be defined and prosecuted.

For decades, terrorism has been consistently tied with attacks from foreign actors, but as homegrown terrorism, often perpetrated by white men, has flourished over the past two decades, Democratic lawmakers have sought to clarify it in federal statute.

According to the Anti-Defamation League, 55% of murders relating to political extremism are connected to white supremacists; just 4% if connected to left-wing politics.

“We’ve seen it before in American history. The only thing missing between these organizations and the past are the white robes," Durbin said. “But the message is still the same hateful, divisive message, that sets off people to do outrageously extreme things, and violent things, to innocent people across America. It’s time for us to take a stand.”

The “great replacement” theory, also known as “white replacement" theory, is the false idea that white Americans are being systematically replaced by nonwhite people for control of the country, and it's existed on the fringes of racist ideology for centuries. In the wake of a deadly Buffalo shooting motivated by white resentment, Dr. Jonathan Metzl explains how it moved into the mainstream.
Copyright AP - Associated Press