SAN DIEGO - A half-dozen Giants gathered underneath a clubhouse TV late Thursday night when the game's highlights popped up. As Jeff Samardzija blew a fastball past a young Padre, a player smiled and yelled, "Sorry ‘bout it!"

Samardzija wasn't. He figured a call-up-heavy Padres lineup would be full of kids with quick bats, so he went to his best weapon, throwing 63 fastballs in seven dominant innings to pace a 2-1 win.

"Usually these young guys are sitting heater," Samardzija said. "You can use that to your advantage if you put it where you want and you're ahead in the count." 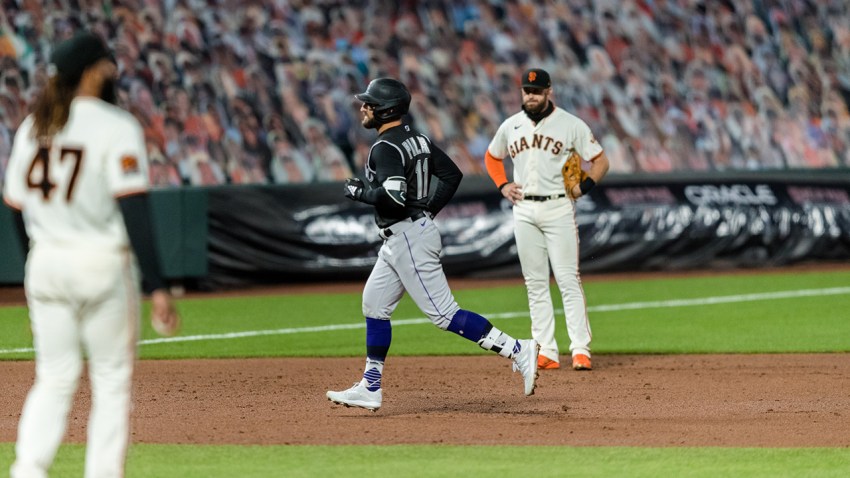 Giants Takeaways: What You Might Have Missed in 7-2 Loss Vs. Rockies

After a Pair of Shutouts, Giants Respond to Rout A's 14-2

Samardzija has been able to do both over the past two months, turning around a season that briefly went off the rails. He has a 2.48 ERA over his past nine starts, and he seems to be getting better as the innings pile up. Samardzija's fastball topped out at 97 mph for a second straight start.

"He's a horse, you know," manager Bruce Bochy said. "That's obviously part of the deal that intrigued us about him. The stuff, how strong he is, the innings he logs. He's a horse. He's really throwing the ball well right now with all of his pitches.

"His delivery, he's so consistent with it. That's probably the biggest thing (lately) because it allows him to command the ball."

Samardzija didn't walk a batter and he struck out nine, but for most of the night he looked headed for a tough-luck loss or no-decision. Over the nine start stretch of dominance, Samardzija has just two wins thanks to poor run support. The Giants had one hit off Christian Friedrich while Samardzija was in the game, but they scratched a couple runs across before the bullpens took over.

Joe Panik started the go-ahead rally with a sharp double to right-center that snapped an 0-for-24 streak. Bochy stuck with Panik against a lefty because he wanted an experienced glove in the middle of the infield with Brandon Crawford out. Panik rewarded the faith.

The young second baseman has spent plenty of time in the video room in recent weeks, watching old clips of doubles and homers and positive moments. He said there was nothing mechanically wrong with his swing. It was simply a slump at a bad time.

"I was getting the barrel to the ball," he said.

Angel Pagan didn't get much of the barrel on the ball as Panik stood on third. He blooped a ball to shallow right-center and Panik briefly froze. He needed to score if it dropped, but also needed to be in position to tag if a diving catch was made. The ball dropped, and Panik raced home as Hunter Renfroe threw a laser to the plate. Wil Myers, seeing that it was a touch up the line, cut it off, surprising the Giants.

"It worked out in our favor," Panik said.

Hunter Pence added an insurance run, and it would be needed. Alex Dickerson homered off Derek Law, but Will Smith finished the eighth and Sergio Romo stranded his own runner on second in the ninth. Romo might not be the closer yet - Bochy had two lefties warming up in the ninth - but he certainly is the current captain of the committee.

Romo's second save clinched Samardzija's 12th victory. Afterward, he smiled as he talked about pitching in meaningful games in September. Samardzija said that's why he came here, and he's ready to empty the tank in October. At this point, there appears to be plenty left. Samardzija's final fastball of the night clocked in at 95 mph.

"I'm going to throw the fastball and live and die by it," he said. "When it's really going where you want it, you're going to have a good day."