Week 1 of the NFL season brought us a lot.

The New Orleans Saints, with no Drew Brees and no Michael Thomas, pummeled Aaron Rodgers and the Green Bay Packers. What is a beatdown New Orleans-style? Correct.

We saw far too much of Andy Dalton and not enough of Justin Fields. Zach Wilson spent too much time on the ground, and Mac Jones didn't care to keep his first NFL touchdown pass.

The 49ers gave us a glimpse into the future with four snaps in a game they shouldn't have had to sweat in Detroit.

Here's what we learned after a wild Week 1 in the NFL.

Kyle Shanahan went off-script, and in doing so, showed everyone a glimpse of where the 49ers' offense is headed this season. Jimmy Garoppolo was impressive in the 49ers' Week 1 win over the Detroit Lions, throwing for 314 yards and one touchdown pass. He can lead this team to a Super Bowl. We already know that.

There will be no calls for Garoppolo to be benched for Trey Lance after the rookie took four snaps and tossed a 5-yard touchdown pass on his only throw. But those four snaps (three runs, one pass) showed where Shanahan and the 49ers want this offense to head this season. Not just with Lance. But with Lance and Garoppolo.

The 49ers by all accounts were interested in Mac Jones when they traded up to No. 3 overall and started doing their homework on the top prospects. Jones would be the prototypical point guard quarterback for the Shanahan offense. But instead, they went with Lance, a quarterback who can launch the ball 60 yards with the flick of his wrist and is a true threat in the run game. With that, Shanahan can take his offense to place no one who runs a version of it has yet. With Lance in the game, the 49ers give defensive coordinators something different to think about when trying to stop the Shanahan scheme. Up until now, defenses have relied on pressure up the middle to stop the run game and to make the play-action staples ineffective. But with Lance on the field, the 49ers will be able to exploit defenses who already are likely to be playing with some of their heaviest packages on the field by virtue of the 49ers' high usage of the fullback and tight ends. He gives the defense another run threat to account for, one that can get to the outside and punish slower, heavier packages that are focused on creating pressure up the middle.

Now, sprinkle in Garoppolo and the fact that the 49ers can ease Lance in and you see how the offense might be able to shift and mutate each week depending on the matchup once Lance is fully integrated. Very few teams currently have the personnel to stop a healthy 49ers offense led by Garoppolo. If the 49ers get to a point where they can seamlessly rotate Lance and Garoppolo in and out to dictate the matchups they want, defenses will be hard-pressed to find a way to consistently stop them. 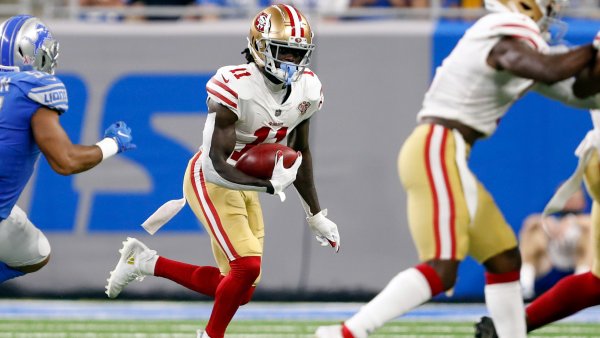 Why Brandon Aiyuk Wasn't Targeted Once in 49ers' Win Vs. Lions 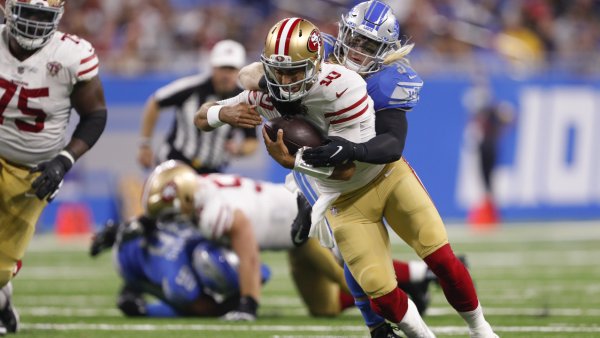 Talent can get you to the NFL. But it takes time to become a star, and the situation a young quarterback finds himself in to start his career is key.

That's why so many are high on Lance. It's why I have no doubt Jones will have long-term NFL staying power.

The top two picks in the NFL draft -- Trevor Lawrence and Zach Wilson -- are elite prospects. Lawrence is the most highly-regarded prospect at least since Andrew Luck and, perhaps Peyton Manning. Wilson can throw the ball a country mile off one leg.

But neither landed in an ideal spot. Such is the curse of being a top draft pick.

Lawrence's NFL debut had some bright moments -- he finished with 332 yards, three touchdowns and three interceptions -- but it was clear he is swimming upstream. Lawrence's mechanics are flawless, the arm strength top-level and the processing robotic. But the Jaguars are the Jaguars.

From the first snap Sunday, it was clear it will take time for Lawrence to become the star many believe he is destined to be and it might not be as a Jaguar. Lawrence's first pass from scrimmage was tipped at the line. But that was negated due to an illegal formation penalty. Then, Urban Meyer burned a timeout. There were drops, dumb penalties and the general lack of execution and preparation that plagues the Jags no matter who the head coach is. Lawrence is talented but he was drafted to NFL hell. His star will take time to overcome the burning black and teal garbage in Jacksonville.

As for Wilson, he was under fire from the opening snap in Carolina. He was sacked six times and spent much of the game running for his life. Brian Burns plastered him. Wilson took hit after hit and kept getting up. He finished the game 20-for-37 for 258 yards, two touchdown passes and one interception. But the Jets have to find a way to keep Wilson upright and healthy -- a proposition that will be more difficult after Mekhi Becton's injury -- if they want him to develop the right way and make it to the end of the year without a serious injury.

The preseason was filled with talk of the two teams that can challenge the Kansas City Chiefs: the Buffalo Bills and the Cleveland Browns.

Both teams fell flat on their face in Week 1.

Josh Allen and the Bills' offense was swarmed by the Pittsburgh Steelers during a 23-16 loss. Allen threw the ball 51 times -- the most in his career -- fumbled twice and missed a few deep shots in a humbling loss. Allen and the Bills were the darlings of the NFL last season en route to the AFC Championship Game, but Buffalo struggled to run the ball and Allen completed just 30 of his 51 attempts (58.8 percent). Allen's completion percentage will be one to monitor after he made an unprecedented improvement last season in which he completed 69.2 percent of his passes after completing just 52.8 and 58.8 percent in his first two seasons, respectively.

The Bills should still be considered the AFC East favorites, but if Allen takes a step back then both the Miami Dolphins and Patriots will enter the conversation.

As for the Browns, oh, the Browns. Cleveland was 10 minutes away from leaving Kansas City with a statement win against the Chiefs. The offense did almost everything it wanted in the first three quarters and Cleveland led 29-20 with 10:24 to play.

But the gap between contender and champion is sometimes the hardest to traverse. And with 10:24 left, the Browns turned back into the Browns as the Chiefs scored two touchdowns in three minutes, aided by a botched punt, and Baker Mayfield was picked off with 1:16 left as the Browns lost their 17th straight season opener.

After Week 1 gut-punches, how the Bills and Browns respond should tell us if the Chiefs will face any resistance outside of Justin Herbert in the AFC.

NFC West setting up to be a bloodbath

Kyler Murray accounted for five total touchdowns. Russell Wilson threw four. Matthew Stafford opened his Rams career with a 67-yard touchdown strike. The 49ers rolled over the Lions before a collection of errors made it closer than it should have been.

The Cardinals roared out to a 6-3 record last year before Murray got hurt and the offense stalled. Kliff Kingsbury needed to get more creative and find ways to help Murray create more explosive plays through the air. On Sunday, Murray threw eight passes that traveled more than 16 yards in the air. He had just one such game last season. The Titans' pass defense was one of the worst in the NFL last season, so perhaps this had more to do with Tennessee's secondary than any adjustment Arizona made. But if it's a sign of a more explosive Cardinals offense, they'll be a hard out in the NFC West.

Wilson wanted the Seahawks' offense to get more modern. Or, at the very least, he wanted to get away from Brian Schottenheimer. Well, Wilson and new offensive coordinator Shane Waldron had a nice debut as the star quarterback threw four touchdown passes in Seattle's win over the Colts. The Colts tried to blitz Wilson but failed to get home and the Seahawks star made them pay as Waldron's Cover 2 beaters tore the Colts to shred and sent them back to the drawing board.

In L.A., Stafford electrified the crowd with his opening bomb to Van Jefferson, showing why Sean McVay coveted him as the QB who could take his offense to the next level. Stafford's arm talent and ability to make off-platform throws gives the Rams a dimension they didn't have with Jared Goff as the trigger man. The Rams' passing attack has the potential to be one of the best in the league with Stafford pulling the strings.

With the 49ers back and relatively healthy, the NFC West has all the makings of a torture chamber that no team will escape unscathed. One in which the victor will have earned their spot atop the pile.