As a fitness class grunted and sweated inside a downtown Oakland gymnasium, artist Aamber Newsome sat on a stool outside painting the figure of a woman on the exterior wall.

All around her, people stopped to snap photos of the multitude of murals that have appeared on boarded-up buildings — much of the art paying tribute to George Floyd and the Black Lives Matter movement.

"Artists have always kind of been the voice of the revolution," Newsome said, pausing from the painting. "Just kind of put a visual to it."

The visuals in Oakland have become as vibrant as the movement that exploded in the outcry over Floyd's death at the hands of four Minneapolis police officers now charged in his killing.

"It's nice to be able to see black people praying in a mural on the street," Newsome said. "It's nice to see people advocating for black rights on walls."

The painted plywood walls near Oakland City Hall have become a sort of community message board, where the messages are shared in paint. Some take direct aim at police reforms, while some prop up a community in pain.

Over the past weekend, that community literally took its message to the streets. On Sunday, a crowd of several hundred painted "Black Lives Matter" in massive yellow letters over several blocks of 15th Street near Broadway. The painting party drew bands, DJs along with artists and non-artists alike.

"It ended up being just wild," said organizer Pancho Kachingwe. "Maybe 400 people total came out, everybody."

The group got a permit to install the painting — and aside from a mis-communication where police briefly confiscated their painting materials only to later return them — the event went off without a hitch. Kachingwe said restaurants donated food for volunteers and a pop-up restaurant even turned up to feed people.

"It was just people coming together and making it work in a way that it's just Oakland," Kachingwe said.

On Monday morning, legions of volunteers answered the city's call for help and turned out in downtown to scrub away graffiti from businesses damaged during recent demonstrations.

"This is the community that we live in so people are trying to take to the streets, what I call 'heal the block,'" said Charlese Banks of the community group Town Experience.

The morning cleanse wasn't just aimed at cleaning up, it was also an attempt to create more sites for artists to create more art. Just as soon as the group cleared graffiti and painted over doors, artists swooped in to begin painting new murals.

"I've literally seen people stand in front of an art piece and cry," said a man who identified himself as Hayon from the community group Occupy Love. "So art can be therapeutic and it can be powerful."

The power of that art seemed to fill the air as people toured the art pieces that lined Broadway, wielding cameras as if it was an organized community art walk.

"It really, I think, exemplifies the Oakland spirit," said Ryan Nicole Austin, who was helping to organize the cleanup. "We take lemons, we make lemonade." 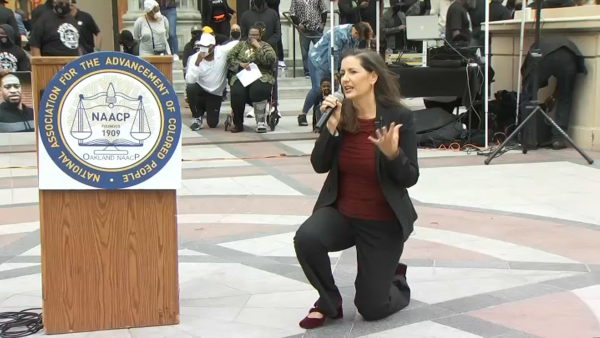