The candlelight vigil at Dublin High School will celebrate, honor and remember the lives of Javier Ramirez, Mark Anthony Urista and Michael Angelo Urista, all 16.

A candlelight vigil will be held Sunday evening to remember three Dublin High School students killed in a crash near Pleasanton on Christmas night, according to Dublin Unified School District Superintendent Dave Marken.

In a message to students, their families and teachers, Marken said, "Our hearts are absolutely broken for our students, families and Dublin High School staff. This is a devastating loss to our community and it is important that we remember to take care of one another during this critical time."

Marken said the candlelight vigil will celebrate, honor and remember the lives of Javier Ramirez, Mark Anthony Urista and Michael Angelo Urista, all 16. It will be held at Dublin High School at 8151 Village Parkway at 5 p.m. on Sunday. 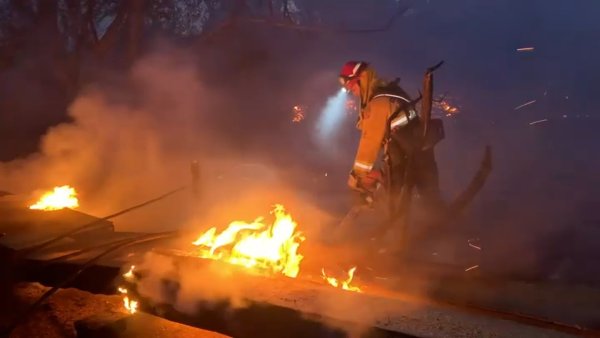 Brush Fire Near Antioch Marina Knocked Down After Burning 13 Acres

"Mark was just such a humble guy to be around...Michael would always be there for you no matter what," said Ale Remolina, a friend of all three victims.

"Javier always had a smile on his face and when anyone else was sad he would always be the first to cheer them up," Remolina said.

A steady stream of people has been coming to the accident scene to leave flowers and pay their respects.

Marken told teachers, "Please let your students know that they are important to us and we will have extra grief counselors and staff members available when they return to school on Tuesday, Jan. 7, 2020, to assist them in coping with this loss in our school community."

The crash was reported shortly before 10 p.m. Wednesday, on Foothill Road just north of Castlewood Drive.

Five teens, including Ramirez and the Urista twin brothers, were traveling in a car that had overturned and hit a large tree, according to the California Highway Patrol. Officers responding found that three people were trapped inside the car and two others had been ejected.

The driver and two passengers were pronounced dead at the scene, while two others were hospitalized with major injuries, the CHP said.

The two injured in the collision have been identified as Dublin High School junior Samantha Vargas Arceo, and Jared Reynoso, the cousin of the Urista twins. Reynoso is also 16.

Marken said the entire community is rocked, and the school is organizing a candlelight vigil on campus this Sunday.

"They're fantastic kids and they had their lives in front of them," Marken said. "In an instant on Christmas night, a tragedy struck our community."

Investigators said the car was heading south on Foothill when, for unknown reasons, the vehicle crossed the northbound lane, hit a power pole and then the tree.

Marken asked that people keep Arceo and the other surviving teen "in your thoughts as they remain in the hospital."