San Francisco police are stepping up high visibility patrols hoping to restore a sense of safety for members of the elderly Asian community after recent attacks.

A 76-year-old Asian American grandmother is recovering at home Thursday, but her family says it will be a long time before she feels safe going outside again.

Xiao Zhen Xie was attacked on Market Street Wednesday. Her daughter and grandson say she can't see out of her right eye.

A 76-year-old Asian American grandmother attacked in San Francisco is recovering at home Thursday but her family says it will be a long time before she feels safe going outside again. Jean Elle reports.

“One of her black eyes is bleeding unstoppable, right eye, she can't see anything right now,” said grandson John Chen. “She is still suffering some serious trauma.”

Police said 39-year-old Steven Jenkins is now in jail after assaulting Zhen Xie and 83-year-old Knoc Pham. Zhen Xie appeared to fight back after being attacked, according to NBC News. 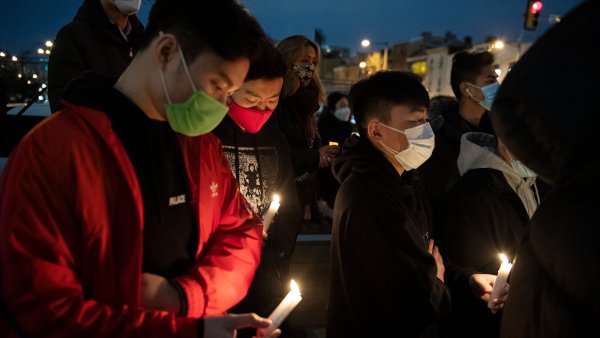 “People always hit the older people why always in the eye- all the seniors hurt and the eye I don't understand,” said daughter May Li.

According to a GoFundMe post, Pham is in the hospital with a fractured nose and possible neck fractures.

“These times are not good for walking, especially for Asian elders targeted a lot,” said Chen.

“You'll see dirt bikes patrolling, you might see members of the swat team out there walking when available,” said Captain Julian Ng.

Meanwhile, people are showing their support for the Asian American community by donating to both victims raising hundreds of thousands of dollars.