The House voted Wednesday to censure Republican Rep. Paul Gosar of Arizona for posting an animated video that depicted him killing Democratic Rep. Alexandria Ocasio-Cortez with a sword, an extraordinary rebuke that highlighted the political strains testing Washington and the country.

Calling the video a clear threat to a lawmaker’s life, Democrats argued Gosar’s conduct would not be tolerated in any other workplace — and shouldn’t be in Congress.

The vote to censure Gosar and also remove him from his House committee assignments was approved by a vote of 223-207, almost entirely along party lines, with Reps. Liz Cheney of Wyoming and Adam Kinzinger of Illinois the only Republicans voting in favor. 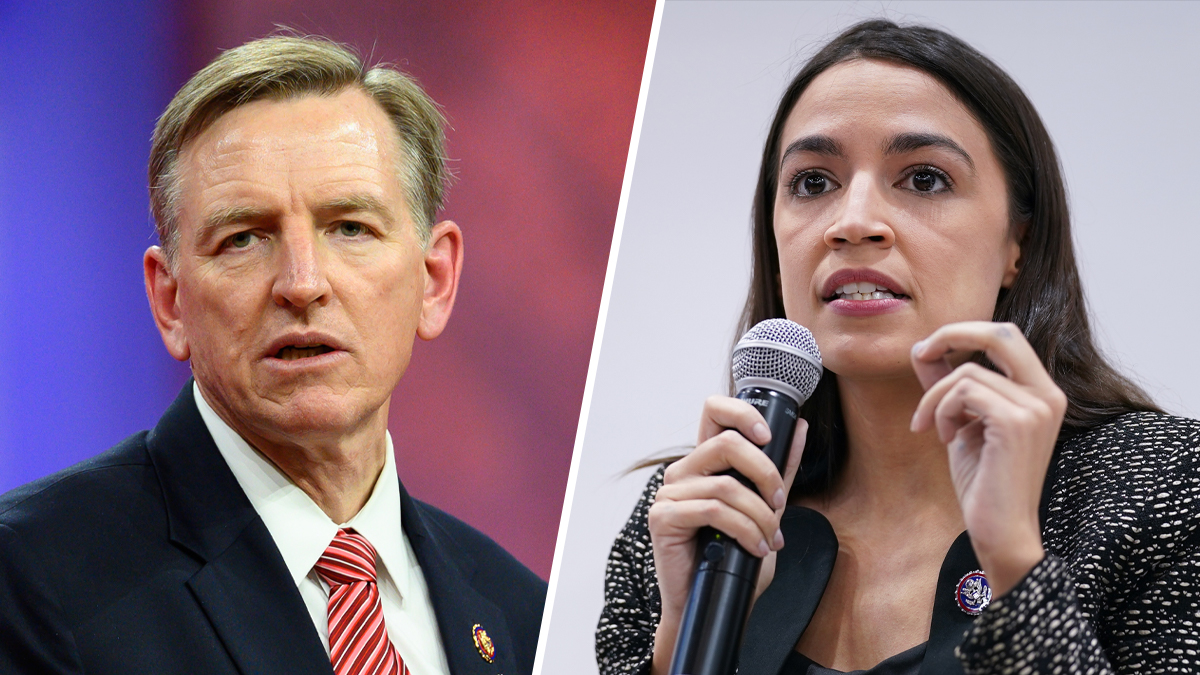 Gosar had deleted the tweet days ago amid the criticism, but he retweeted the video late Wednesday shortly after the vote.

He showed no emotion as he stood in the well of the House after the vote, flanked by roughly a dozen Republicans as Speaker Nancy Pelosi read the censure resolution and announced his penalty. He shook hands, hugged and patted other members of the GOP conference on the back before leaving the chamber.

Republican Minority Leader Kevin McCarthy called the censure an “abuse of power” by Democrats to distract from national problems. He said of the censure, a “new standard will continue to be applied in the future,” a signal of potential ramifications for Democratic members should Republicans retake a majority.

In a House debate on Wednesday, Republican Rep. Paul Gosar of Arizona said that if he were to be censured by the House for the video he posted on Twitter depicting violence against Rep. Alexandria Ocasio-Cortez, “so be it, it is done.”

But Democrats said there was nothing political about it.

“These actions demand a response. We cannot have members joking about murdering each other," said Pelosi. “This is both an endangerment of our elected officials and an insult to the institution.”

Ocasio-Cortez herself said in an impassioned speech, ”When we incite violence with depictions against our colleagues, that trickles down to violence in this country. And that is where we must draw the line.”

Unrepentant during tense floor debate, Gosar rejected what he called the “mischaracterization” that the cartoon was “dangerous or threatening. It was not.”

“I do not espouse violence toward anyone. I never have. It was not my purpose to make anyone upset," Gosar said.

The decision to censure Gosar, one of the strongest punishments the House can dole out, was just the fourth in nearly 40 years — and just the latest example of the raw tensions that have roiled Congress since the 2020 election and the violent Capitol insurrection that followed.

Democrats spoke not only of the deadly Jan. 6 insurrection,but also the violent attacks that have escalated on both parties, including the 2017 shooting of Republican lawmakers practicing for a congressional baseball game and the 2011 shooting of former Arizona Rep. Gabby Giffords as she met with constituents at an event outside a Tucson grocery store.

Republicans largely dismissed Gosar's video as nothing more than a cartoon, a routine form of political expression and hardly the most important issue facing Congress.

Yet threats against lawmakers are higher than ever, the chief of the U.S. Capitol Police told the Associated Press in an interview earlier this year.

Capitol Police Officer Harry Dunn appeared before the House Select Committee speaking about the Jan. 6 attack on the Capitol. Dunn said he had never been called a racial slur in uniform before that day.

The censure of Gosar was born out of Democratic frustration. Over the past week, as outrage over the video grew, House GOP leaders declined to publicly rebuke Gosar, who has a lengthy history of incendiary remarks. Instead, theylargely ignored his actions and urged their members to vote against the resolution censuring him.

Rep. Matt Gaetz of Florida said, “I would just suggest we have better things to do on the floor of the House of Representatives than be the hall monitors for Twitter.”

The resolution will remove Gosar from two committees: Natural Resources and the Oversight and Reform panel, on which Ocasio-Cortez also serves, limiting his ability to shape legislation and deliver for constituents. It states that depictions of violence can foment actual violence and jeopardize the safety of elected officials, citing the Jan. 6 attack on the U.S. Capitol as an example.

Gosar is the 24th House member to be censured. Though it carries no practical effect, except to provide a historic footnote that marks a lawmaker’s career, it is the strongest punishment the House can issue short of expulsion, which requires a two-thirds vote.

Democratic Rep. Charles Rangel, the former chairman of the powerful House Ways and Means Committee, was the last to receive the rebuke in 2010 for financial misconduct.

It would also be second time this year the House has initiated the removal of a GOP lawmaker from an assigned committee, the first being Marjorie Taylor Greene of Georgia.

The U.S. House will vote Thursday on removing Rep. Marjorie Taylor Greene, R-Ga., from her committee assignments over a string of false and inflammatory statements the freshman lawmaker has made.

Gosar, a six-term congressman, posted the video over a week ago with a note saying, “Any anime fans out there?” The roughly 90-second video was an altered version of a Japanese anime clip, interspersed with shots of Border Patrol officers and migrants at the southern U.S. border.

During one roughly 10-second section, animated characters whose faces had been replaced with Gosar, Greene and Rep. Lauren Boebert, R-Colo., were shown fighting other animated characters. Gosar’s character is seen striking another one made to look like Ocasio-Cortez in the neck with a sword. The video also shows him attacking President Joe Biden.

Ocasio-Cortez, D-N.Y., whose receipt of repeated death threats has required her to spend thousands on security, said Gosar has not apologized to her. She singled out McCarthy for not condemning Gosar.

This is not the first brush with controversy for Gosar, who was first elected in 2010’s tea party wave. He has been repeatedly criticized by his own siblings, six of whom appeared in campaign ads supporting his Democratic opponent in 2018.

Earlier this year Gosar looked to form an America First Caucus with other hardline Republican House members that aimed to promote “Anglo-Saxon political traditions” while warning that mass immigration was putting the “unique identity” of the U.S. at risk. He’s made appearances at fringe right-wing events, including a gathering in Florida last February hosted by Nick Fuentes, an internet personality who has promoted white supremacist beliefs.

He has also portrayed a woman shot by Capitol police during the attack on the Capitol as a martyr, claiming she was “executed.” And he falsely suggested that a 2017 white supremacist rally in Charlottesville, Virginia, was instigated by “the left” and backed by billionaire George Soros, a major funder of liberal causes who has become the focus of anti-Semitic conspiracy theories.

Seth Meyers takes a closer look at Republicans standing by Rep. Marjorie Taylor Greene as the House stripped her of committee assignments.