Teachers After Texas Attack: ‘None of Us Are Built for This'

Many teachers have a feeling that these tragedies will continue to happen, and believe politicians rarely do anything about it

Teacher Jessica Salfia was putting up graduation balloons last month at her West Virginia high school when two of them popped, setting off panic in a crowded hallway between classes.

One student dropped to the floor. Two others lunged into open classrooms. Salfia quickly shouted, “It’s balloons! Balloons!” and apologized as the teenagers realized the noise didn’t come from gunshots.

The moment of terror at Spring Mills High School in Martinsburg, about 80 miles northwest of Washington happened May 23, the day before a gunman fatally shot 19 children and two teachers in a classroom in Uvalde, Texas. The reaction reflects the fear that pervades the nation's schools and taxes its teachers — even those who have never experienced such violence — and it comes on top of the strain imposed by the coronavirus pandemic.

Salfia has a more direct connection to gun threats than most. Her mother, also a West Virginia teacher, found herself staring down a student with a gun in her classroom seven years ago. After talking to him for some two hours, she was hailed for her role in helping bring the incident to a peaceful end.

For any teacher standing in front of a classroom in 21st century America, the job seems to ask the impossible. Already expected to be guidance counselors, social workers, surrogate parents and more to their students, teachers are sometimes called on to be protectors, too.

The U.S. public school landscape has changed markedly since the Columbine school shooting in Colorado in 1999, and Salfia said teachers think about the risks every day.

George Theoharis was a teacher and principal for a decade and has spent the past 18 years training teachers and school administrators at Syracuse University. He said teachers are stretched more now than ever — even more than last year, "when the pandemic was newer.”

“We’re sort of left in this moment where we do expect teachers and schools to solve all our problems and do it quickly,” he said.

Schools nationwide have been dealing with widespread episodes of misbehavior since the return to in-person learning, which has been accompanied by soaring student mental health needs. In growing numbers, teens have been turning to gun violence to resolve spur-of-the-moment conflicts, researchers say. 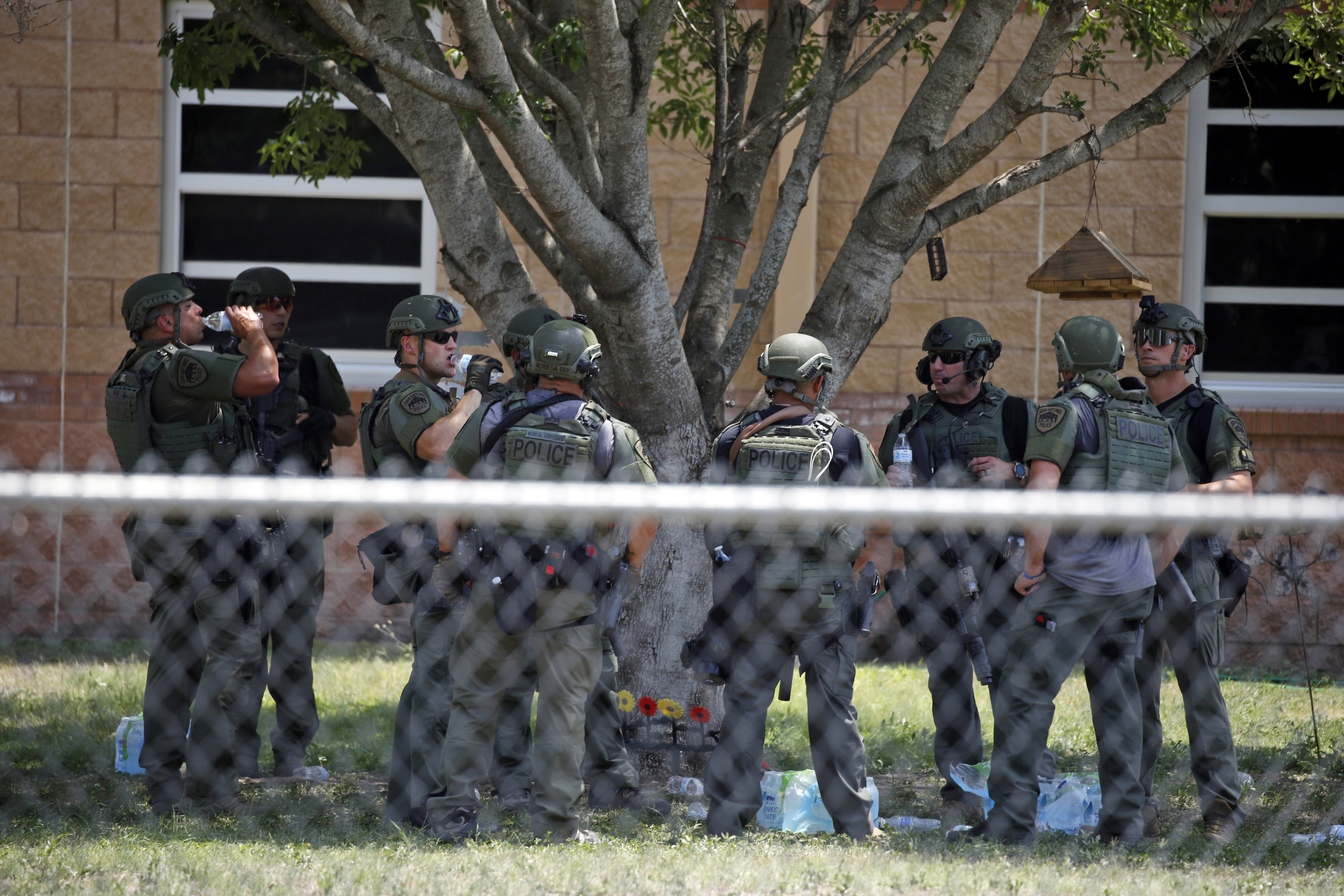 In Nashville, Tennessee, three Inglewood Elementary School staffers sprang into action last month to restrain a man who had hopped a fence. After children on the playground were directed inside, the man followed them, but he was tackled by kindergarten teacher Rachel Davis.

At one point, secretary Katrina “Nikki” Thomas held him in a headlock. They and school bookkeeper Shay Patton cornered the man, who didn’t have a gun, inside the school until authorities arrived. All three employees were hurt.

“For me, it was just like, these kids are innocent," Patton said. “I just knew that they couldn’t protect themselves, so it was on us to do it. And I didn’t think twice.”

The three employees watched in horror less than two weeks later as news of the Uvalde shooting unfolded.

Adding to frustration for some educators was the scapegoating of a teacher initially blamed for propping open the door a gunman used to enter the Uvalde, Texas elementary school. Days later, officials said the teacher had closed the door, but it didn't lock.

Kindergarten teacher Ana Hernandez said Texas educators are anxious after a rough patch that has lasted years and shows no sign of ending. She and a group of colleagues from Dilley drove an hour to Uvalde to do all they could, delivering donated stuffed animals and cases of water. She said more is needed.

“It interferes with their ability to function, and it also interferes with students’ ability to learn,” Jennings said. “So when things like this happen, the school shootings, it shuts everybody down. It’s very hard to learn when you’re afraid for your life.”

The gunman who killed 19 students and 2 teachers at Robb Elementary School in Uvalde, Texas, couldn’t be stopped by police for at least 40 minutes after the attack began. A representative for the Gun Owners of America says one solution is to let teachers carry guns too — to take down mass shooters when police can't.

"You’re a first responder. You’re a first reporter. If there’s an issue in the home, you are sometimes the only chance a kid has at love, at getting food that day, at maybe getting a warm and safe place to be that day. The scope of the job is huge right now.”

There's also a sense that tragedies continue to happen, and politicians rarely do anything about it.

“It is so hard to know that, at any moment, that reality could also be your reality, or the reality of your children," said Salfia, a mother of three students. “My youngest is the same age as the kids who were killed in Texas. It sharpens everything, I think, especially when you're in a classroom.”

In August 2015, the new school year had barely started for Salfia's mother, teacher Twila Smith, when a freshman entered Smith's world studies class at Philip Barbour High School and drew a gun he had taken from his home.

For about 45 minutes, Smith said, no one outside the room knew the class was being held hostage. She diverted his attention from other students and tried to keep him talking while she walked around the room with him.

Eventually, police persuaded the boy to let everyone go. After at least another hour and a half, his pastor helped convince the boy to surrender. A few months later, he was sentenced to a juvenile facility until he turns 21.

Smith, who has a background in dealing with students with behavior problems, was among those hailed as heroes, a label she deflected.

Smith saw those freshmen through to graduation in 2019. Then she retired.

Back at Spring Mills High, one of Salfia’s former students now works in her department as a first-year English teacher. When asked what she tells others hoping to go into her field, Salfia repeated the ex-pupil’s description of what today’s teachers go through: “None of us are built for this." But their commitment to the profession is such that they “are only built for it,” and could scarcely consider any other career.

After the balloons popped, “kids were visibly rattled,” she recalled. “Some people were a little bit angry at me, I think, in reaction to that fear that everyone had experienced momentarily."

She knows that's the world she and her students live in now.

“We are all, at any moment, prepared to run from that sound."

Questions and confusion still surround the police response to a mass shooting inside an elementary school in Uvalde, Texas. Jillian Snider, Director of Criminal Justice and Civil Liberties at the R Street Institute and Dr. Donell Harvin, Senior Researcher Rand Corporation join LX News to discuss what went wrong and what could have been done differently.

The Associated Press education team receives support from the Carnegie Corporation of New York. The AP is solely responsible for all content.

More on the school shooting in Uvalde, Texas: https://apnews.com/hub/uvalde-school-shooting