Key Impeachment Moments: ‘We Were Invited' and a Quick Defense

“The First Amendment does not create some superpower immunity from impeachment,” said Rep. Jamie Raskin

Donald Trump incited a deadly attack on the U.S. Capitol, put his own vice president in danger and later expressed solidarity with rioters who attempted to overturn the 2020 election in his name, Democrats argued Thursday as they wrapped up opening arguments in Trump's impeachment trial.

Over two days of testimony, the Democrats asserted that Trump deliberately ordered his supporters to "fight like hell" and “go by very different rules” or they “wouldn't have a country anymore." They bolstered their case with accounts from the rioters themselves, some of whom said they were acting on Trump's orders.

The former president's defense team insists Trump's speech near the White House was protected under the First Amendment. And they argue he shouldn't be on trial in the Senate because he is no longer in office — an argument Democrats reject.

“The First Amendment does not create some superpower immunity from impeachment,” said Rep. Jamie Raskin, a Maryland Democrat who is leading the prosecution. “If you don’t find this a high crime and misdemeanor today, you have set a new terrible standard for presidential misconduct.”

The day started with a warning from House Democrats that graphic videos from the Capitol Riot would be played throughout the day. Here are some of the other key moments.

Highlights from the trial on Thursday:

‘WE WERE INVITED HERE’

“Fight for Trump.” “Trump sent us.” “We are listening to Trump.” “We wait and take orders from our president”

Democrats focused intently on words offered by rioters to rationalize their storming of the Capitol. It was part of a broader effort to directly link the president’s call for his loyalists to “fight like hell” with the death, destruction and mayhem that followed his speech on Jan. 6.

In many cases, rioters, who sought to stop Congress from certifying President Joe Biden's Electoral College victory, explained that they were acting at Trump's behest.

To underscore their point, Democrats showed videos using rioters own words. Among them was Jennifer Ryan, a Texas real estate agent who was criminally charged but insists she was just "following my president.”

One video showed a man in the Capitol during the siege, who suggested to his friends that they pick up an office phone and call Trump to say, “We love you, bro!”

Another captured a man shouting at police: “We were invited here.”

Democratic impeachment managers also noted that many left after Trump released an online video hours after the attack, urging them to go home.

“Today is ours. We won the day,” a man with a bullhorn can be heard saying in one clip. He then added that Trump wanted "everybody to go home."

The first day of former President Donald Trump’s impeachment trial ended with the Senate approving a resolution asking whether it was constitutional to try a former president in a Senate impeachment trial. Here are other key moments from the day.

A HISTORY OF VIOLENCE

The violence at the Capitol shocked the nation. But Democratic impeachment managers said that, in hindsight, it should have been no surprise.

Ever since Trump descended a golden escalator in his New York tower to launch his presidential bid in 2016, he has openly stoked and incited his supporters to violence, they said. Then they showed an exhibit cataloging his past incendiary remarks.

When Trump supporters attacked a protester at a 2016 campaign rally, the then-candidate called it "very, very appropriate."

Another time, he urged supporters to "knock the crap out of" a protester and promised to pay their legal fees.

In 2017, after a woman in Charlottesville, Virginia, was struck and killed by a car driven by a white supremacist during violent clashes, Trump said there were "fine people on both sides."

"These are very good people but they are angry. They want their lives back again,” Trump said.

The FBI later broke up a plot to kidnap Whitmer by anti-government extremists upset over coronavirus restrictions she had imposed in the state.

“The siege of the Michigan statehouse was effectively a state-level dress rehearsal," Raskin said. “It was a preview of the coming insurrection.” 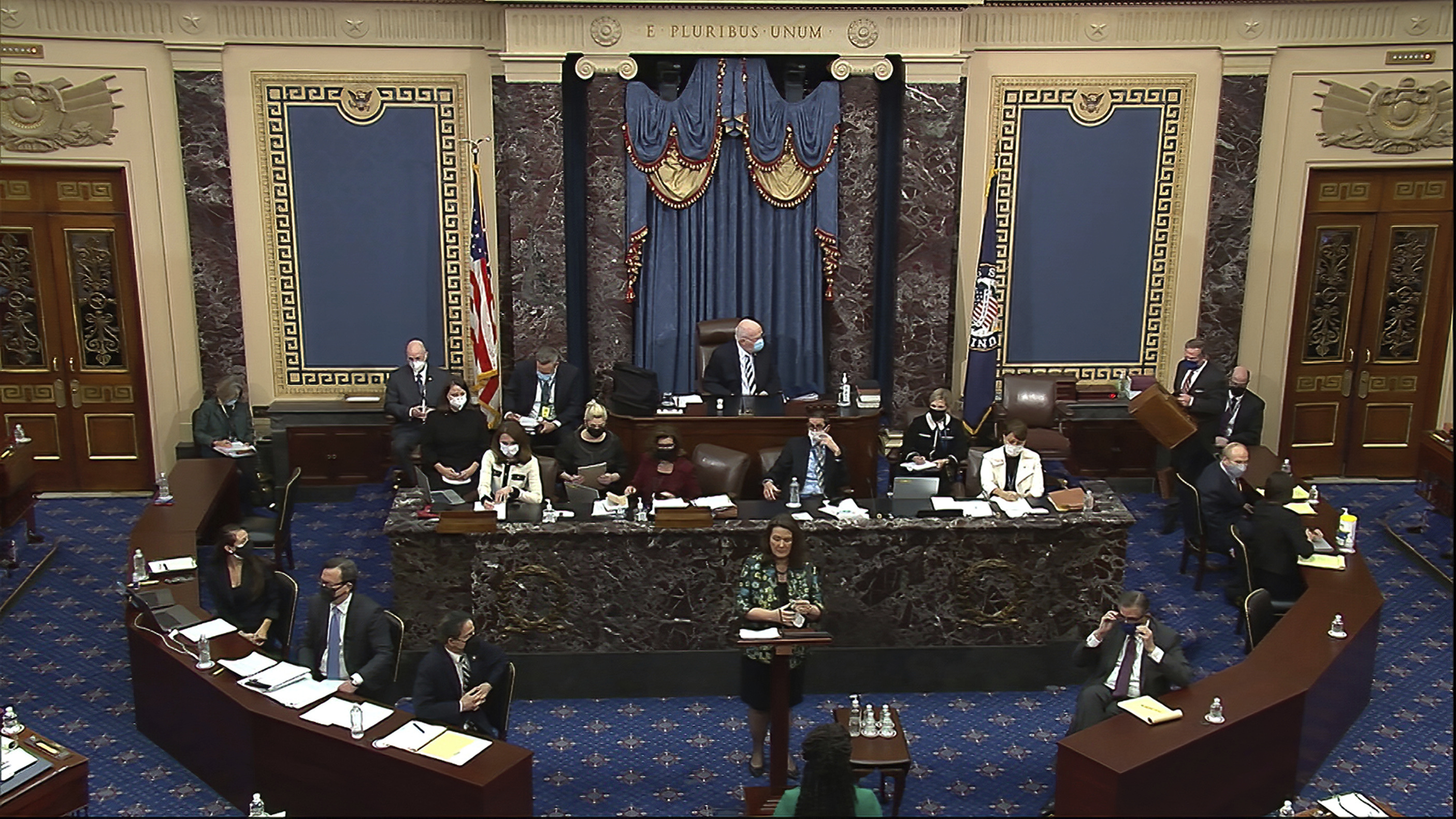 Trump attorney David Schoen said Thursday that the defense's case should go quickly on Friday, making clear they have no intention of using the 16 hours available to them.

“There’s no reason for us to be out there a long time,” Schoen said during an appearance on Fox News before blasting Democrats for the “harm this is causing to the American people.”

Schoen told reporters that the Democrats’ video presentations during the trial were “offensive” and that they “haven’t tied it in any way to Trump.” He said he believed Democrats were effectively making the public relive the tragedy in a way that “tears at the American people” and impedes efforts at unity in the country.

Trump senior adviser Jason Miller said he expects the defense will wrap up in less than a day.

Former President Donald Trump’s attorney, Bruce Castor, said arguing that Trump violated the 14th Amendment and incited an insurrection is “ridiculous.” “It doesn’t take a Constitutional scholar to recognize that [the 14th Amendment] is written for people who fought for the Confederacy… and it doesn’t take a Constitutional scholar to require that they be convicted first in a court with due process of law,” Castor said.

Many Senate Republicans have indicated they will not vote to impeach Trump, a sign of cooling of emotions that had run hot just over a month ago.

As Democrats look to secure the 67 votes needed for a conviction, they used a slideshow presentation on Thursday to remind Senate jurors of the widespread outrage voiced in the wake of the attack, when many in the party directly blamed Trump — including Republicans who had worked for him.

“Today's violent assault on our Capitol, an effort to subjugate American democracy by mob rule, was fomented by Mr. Trump,” read a statement issued by James Mattis, Trump's former secretary of defense, hours after the attack.

Another slide showed a statement from John Kelly, Trump's former chief of staff, who said the violence was “a direct result of (Trump) poisoning the minds of people with the lies and the fraud.”

"The invasion of our Capitol by a mob, incited by lies from some entrusted with power, is a disgrace to all who sacrificed to build our Republic," read another, which showed a tweet from former Republican House Speaker John Boehner.

Democrats also showed a chart of the 16 administration officials and Cabinet members who resigned in the aftermath of the attack on the Capitol, including Transportation Secretary Elaine Chao and Education Secretary Betsy DeVos.

“There is no mistaking the impact your rhetoric had on the situation, and it is the inflection point for me," DeVos said at the time.

Former President Trump's second impeachment trial begins in the Senate on Tuesday. Do Americans want to see a conviction? Much like during the 2020 election, the country is split. Noah Pransky breaks down the latest poll numbers as well as the likelihood the Senate will vote to convict.
Copyright AP - Associated Press