The Supreme Court ruling to overturn its 1973 Roe v. Wade decision is unpopular with a majority of Americans — but did that matter?

The relationship between the public and the judiciary has been studied and debated by legal and political scholars. The short answer: it’s complicated. There’s evidence that the public has an indirect role in the judiciary, but that might be changing.

In the final opinion, Justice Samuel Alito wrote that the court “cannot allow our decisions to be affected by any extraneous influences such as concern about the public’s reaction to our work.”

Polls following the leaked draft of the opinion show approval of the Supreme Court — which was already suffering — slumped even further, driven by those who supported keeping Roe.

The court and public opinion have clashed at times, but they've entered into a “symbiotic relationship" over the last 60 years, Barry Friedman suggests in his 2009 book “The Will of the People." The court doesn't stray too far from popular opinion.

How that happens and whether it remains true are harder to know for certain. “We don’t have a viewfinder that shows us what the justices are doing,” said Maya Sen, political scientist and professor at the Harvard Kennedy School. “It’s a complicated chicken-and-egg situation where we can try to disentangle these forces, but it’s very hard to do.”

All of the Supreme Court justices were questioned about their judicial beliefs on the legal precedent of Roe v. Wade during their senate confirmation hearings. Here’s what they had to say.

IS PUBLIC OPINION ON ABORTION CLEAR?

Public opinion on abortion is nuanced, but polling shows broad support for Roe and for abortion rights. Seventy percent of U.S. adults said in a May AP-NORC poll that the Supreme Court should leave Roe as is, not overturn it.

Roe is one of “a handful of cases” that people recognize, Sen said, and it’s “recognized as important Supreme Court precedent.”

“I think many Americans believe that there should be some sort of kind of sliding scale where the right is protected and then as the pregnancy continues, then the interests of the potential life become more significant,” Sen said, adding that Roe allowed for that nuanced thinking.

Researchers have found — and some of the justices themselves have acknowledged — that court decisions and public opinion are often aligned, but some experts say it’s probably not a direct link.

The most important thing in decision-making is justices’ “set of political and judicial philosophies that give them preferences over the outcomes of the cases,” said Joseph Ura, political science professor at Texas A&M University. “Everything else is kind of marginal around that."

Justices themselves experience the same things that everyday Americans do, which makes it harder to assess causality.

“It’s really hard to decipher: was it public opinion that’s driving these decisions or is it just that the justices have preferences and they’re exposed to the same thing that most of us are exposed to?” said Elizabeth Lane, assistant professor of political science at Louisiana State University. 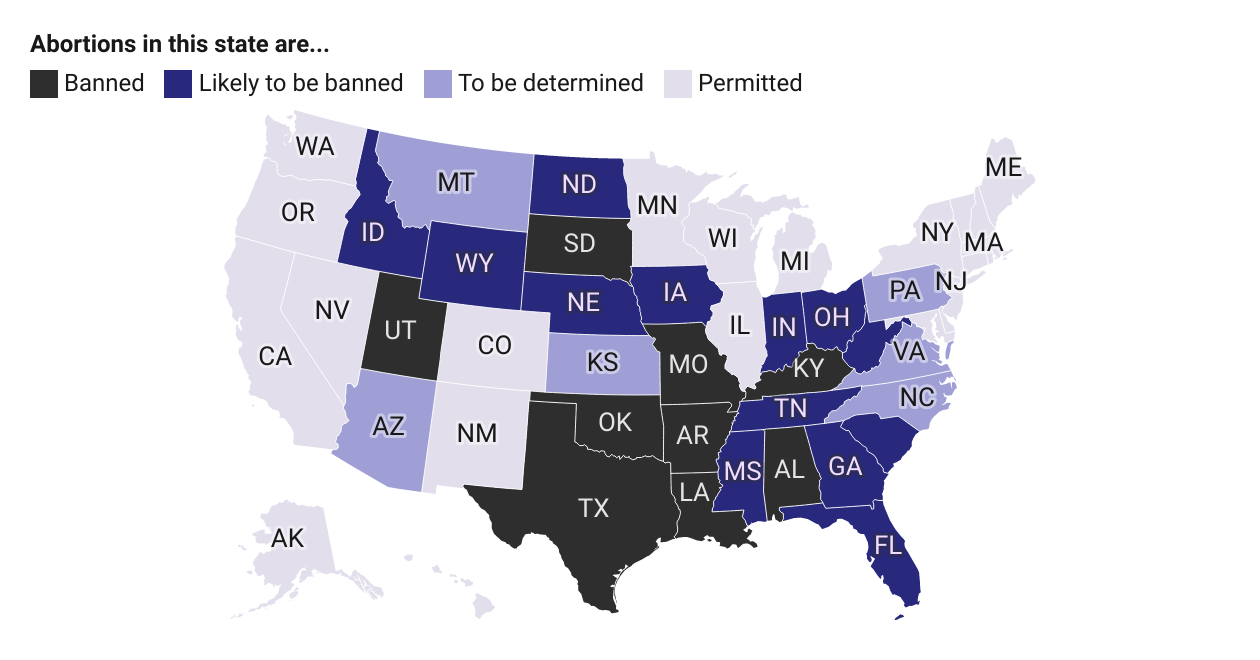 Where Are Abortions Illegal? A State-by-State Guide to Laws Across the US 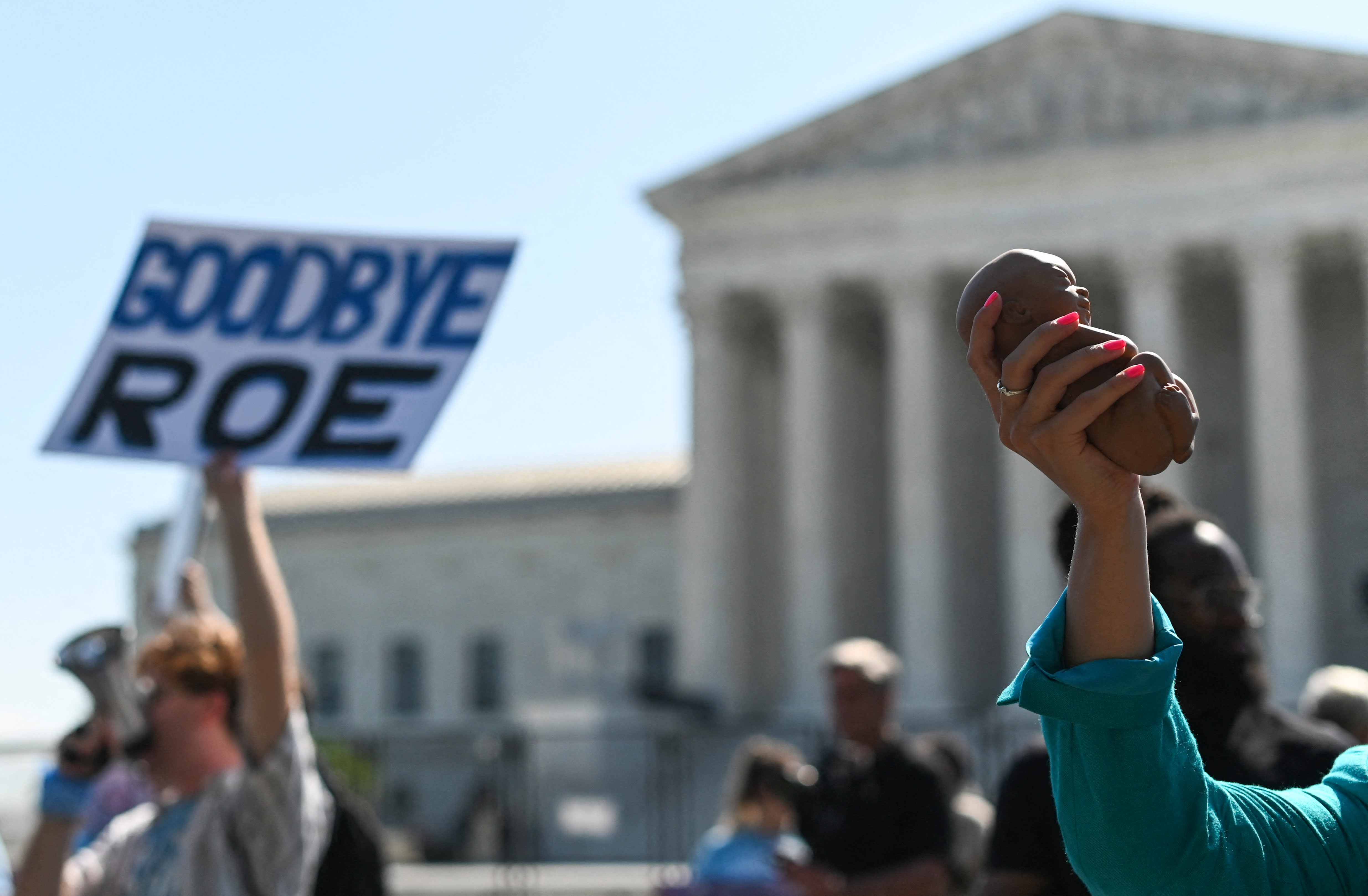 Scholars point to judicial appointments and court legitimacy as potential ways that the public has indirect influence on the court.

For one, voters elect a president, who nominates justices, and senators, who confirm them.

“Over the longer run, assuming there’s kind of a reasonable rotation of the justices leaving office for whatever reason that aligns with the party’s historical alternation in power, the court can preserve its alignment with public opinion,” said Ura.

That’s been undermined recently, experts say. By chance and by political maneuvering, a larger number of sitting justices — six of them — were appointed by Republican presidents.

In their dissent, the court’s liberal justices wrote: “The Court reverses course today for one reason and one reason only: because the composition of this Court has changed.”

Justices may also consider how the public will receive a ruling, though the new abortion ruling makes clear some on the court don’t believe that’s an important consideration.

While the court can issue its ruling, it has to rely on other actors — the public, politicians and even lower courts — to accept and implement it, said Charles Franklin, professor of law and public policy and director of the Marquette Law School poll.

“I doubt that the justices wake up every morning and check the polls to see if people agree, but over the long haul, the court does need a level of public support as a mechanism for their rulings being enforced,” Franklin said.

The threshold of support that the court needs might be changing. A reaction from the public or elected officials has “less currency” than it used to because of deepening political polarization, Ura said. A controversial or unpopular decision won’t necessarily raise the ire of a bipartisan coalition.

DOES IT MATTER IF THE PUBLIC’S FAITH IN THE COURT IS LOW?

The court has historically enjoyed consistently positive views among the public. But polling showed confidence in and approval of the court began to dip last year, and it has worsened since the leaked draft. Does it matter if the public’s faith in the court is low?

“The idea of the legitimacy of the court was a way it could sustain itself when it ruled counter to the majority opinion,” Franklin said.

Justice Sonia Sotomayor recently emphasized the need for public faith in the court system. Justice Elena Kagan in 2018 spelled out why: “You know we don’t have an army. We don’t have any money. The only way we can get people to do what we think they should do is because people respect us."

Michael Salamone, political science professor at Washington State University, explained that “specific support” for the court — what's measured in polls — can easily fluctuate with reactions to court decisions. But “diffuse support” — faith in the institution's role in democracy — is historically resilient. It remains to be seen whether that diffuse support will suffer because of the decision to overturn Roe.

“Just based on the amount of rhetoric and the high-profile nature of so many of these decisions," he said, "I’m wondering if we’ve perhaps reached our limit to that resilience.”

Planned Parenthood Association of Utah filed a lawsuit in Utah state court Saturday and will request a temporary restraining order against the states ban on abortion.
Copyright AP - Associated Press