Firefighters are making progress on a California wildfire threatening South Lake Tahoe, officials said Saturday, lifting hopes for tens of thousands of residents who are waiting this weekend to return to the resort town.

Lighter winds and higher humidity continue to reduce the spread of flames, and fire crews were quick to take advantage by doubling down on burning and cutting fire lines around the Caldor Fire.

Bulldozers with giant blades, crews armed with shovels and a fleet of aircraft dropping hundreds of thousands of gallons of water and fire retardant helped keep the fire’s advance to a couple of thousand acres — a fraction of its explosive spread last month and the smallest increase in two weeks.

“The incident continues to look better and better every day,” Tim Burton, an operations chief with the California Department of Forestry and Fire Prevention, told firefighters at a Saturday briefing. “A large part of that is due to your hard work as well as the weather cooperating in the last week or so.”

The northeast section of the immense Sierra Nevada blaze was still within a few miles of South Lake Tahoe and the Nevada state line but fire officials said it hadn’t made any significant advances in several days and wasn’t challenging containment lines in long sections of its perimeter.

A map displayed at a Friday evening briefing showed much of the 333-square-mile (862-square-kilometer) blaze ringed in black, to indicate containment lines.

With the fire about one-third surrounded, authorities allowed more people back into their homes on the western and northern sides of the fires Friday afternoon.

But there was no timeline for allowing the return of 22,000 South Lake Tahoe residents and others across the state line in Douglas County, Nevada who were evacuated days ago. Authorities were taking that decision day by day.

“It’s all based on fire behavior,” said Jake Cagle, a fire operations section chief. “For now, things are looking good ... we’re getting close.” 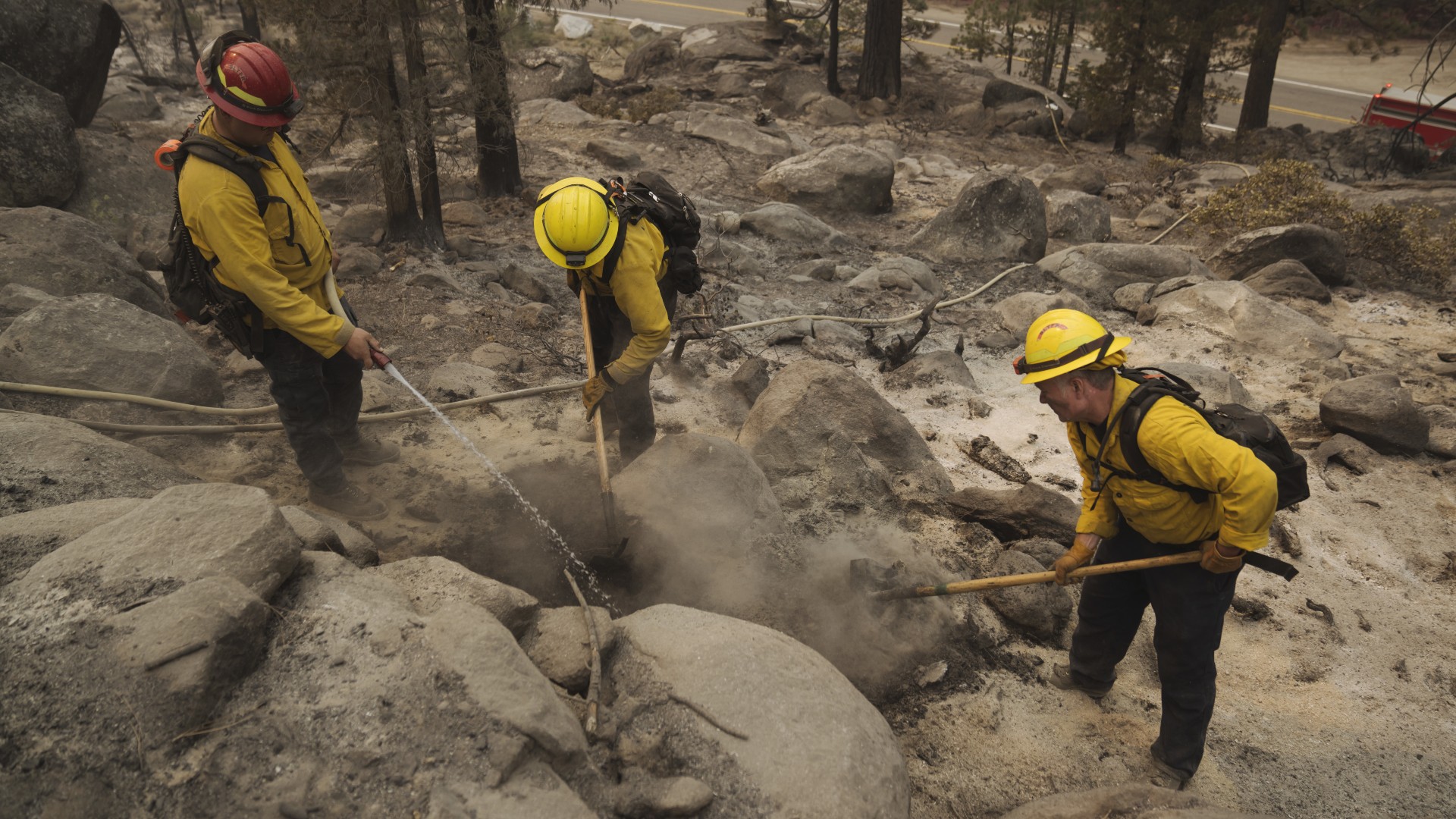 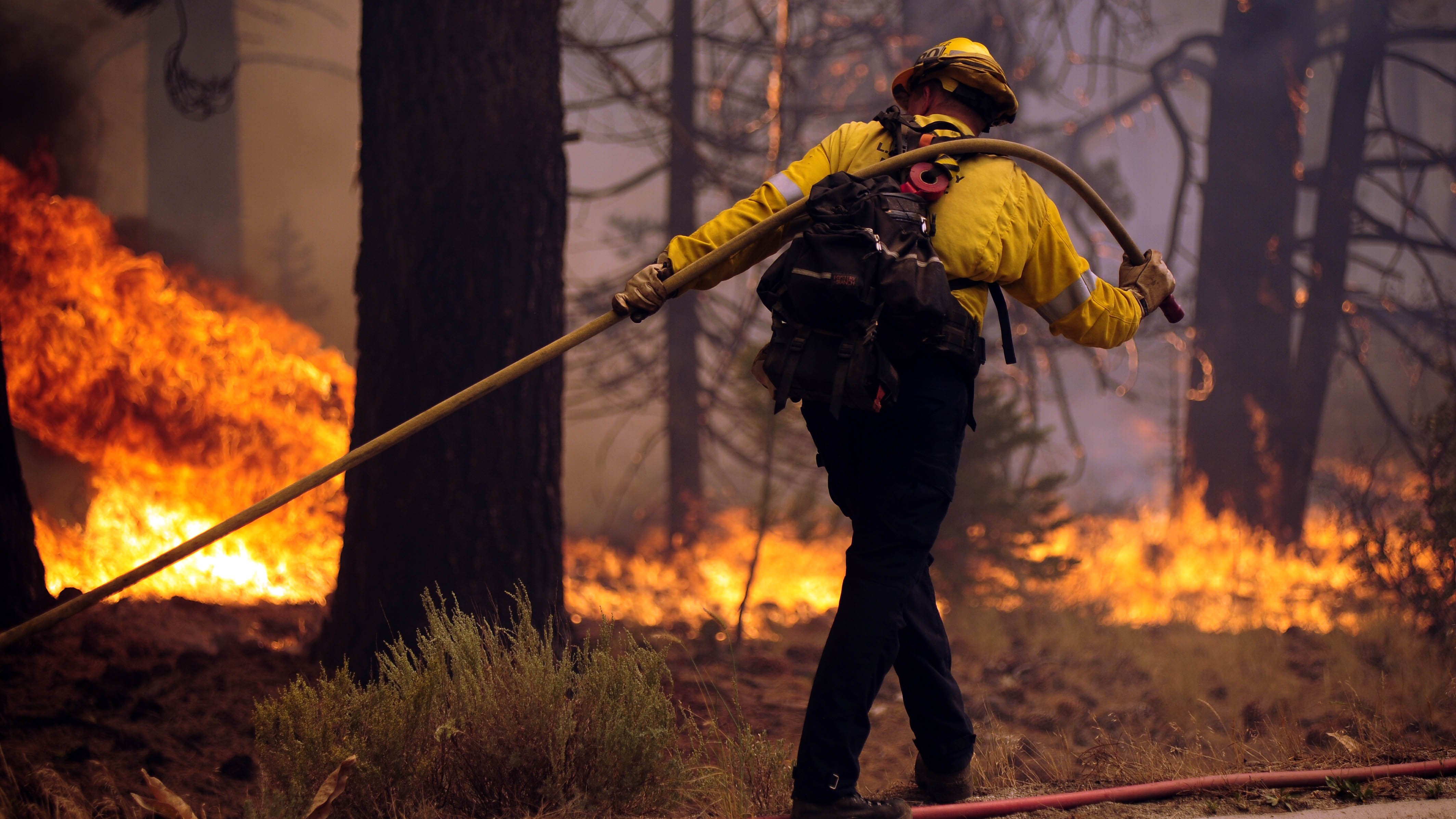 The resort area can easily accommodate 100,000 people on a busy weekend but was eerily empty just before the holiday weekend.

The wildfire dealt a major blow to an economy that heavily depends on tourism and was starting to rebound this summer from pandemic shutdowns.

“It’s a big hit for our local businesses and the workers who rely on a steady income to pay rent and put food on their table,” said Devin Middlebrook, mayor pro-tem of South Lake Tahoe.

He said the shutdown will also hurt the city, as it gets most of its revenue to pay for police and fire services, as well as road maintenance, from hotel taxes and sales taxes.

Fire crews still had a lot of work to do in the grasslands, timber stands and granite outcroppings. And despite the overall better weather, winds could still be “squirrely” and locally erratic as they hit the region’s ridges and deep canyons.

Hundreds of homes have been destroyed by the Caldor Fire, but thousands more have been saved thanks to firefighters finding creative ways to get around the mountainous terrain. Thom Jensen reports.

Wildfires this year have burned at least 1,500 homes and decimated several mountain hamlets. The Dixie Fire, burning about 65 miles (105 kilometers) north of the Caldor Fire, is the second-largest wildfire in state history at about 1,380 square miles (3,574 square kilometers) and is 55% contained.