Clean Up the Lake is putting its name into action.

The nonprofit organization is embarking on a colossal Lake Tahoe cleanup effort, aiming to pull out plastic bottles, tires, fishing equipment and other pieces of trash they find in the water along the alpine lake's entire 72-mile-long shoreline. It's believed to be the largest ever underwater cleanup project at the treasured lake.

"I want to do something that makes a difference," said Colin West, Clean Up the Lake's founder and executive director. 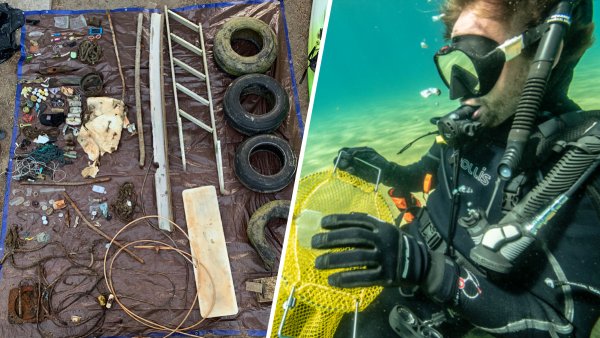 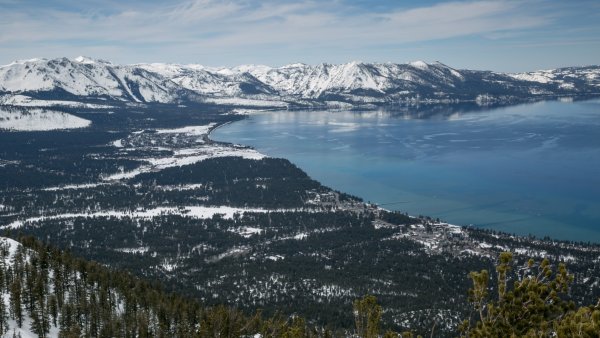 That mission begins Friday in the Edgewood area, which is located next to South Lake Tahoe on the other side of the California-Nevada border. From there, Clean Up the Lake's growing team of staff and volunteers will move counterclockwise along the shoreline, scooping up trash from the water's edge to depths up to 25 feet.

"Whether it’s boaters or people on the beaches, trash can tend to be closer to shore," West said. "There has been a high density of trash in those areas."

The group plans to collect trash three days a week, with the goal of covering one mile of shoreline per day. Scuba divers will comb the lakebed for trash. They'll put smaller pieces like aluminum cans and clothing in mesh bags. Larger items like tires will be hoisted to the surface with help from vessels above. Debris too heavy to be lifted by humans will be marked with a GPS coordinate and removed later with the proper machinery.

This won't be the nonprofit's first crack at a cleanup endeavor. During previous cleanup efforts covering six to seven miles of Tahoe shoreline, the group pulled out over 3,000 pounds of trash, West said. How much they'll collect during this upcoming months-long effort remains a mystery.

Once the trash is plucked from the water, it will be counted and categorized – every single piece.

"We’re classifying it into 77 different categories, so from wood to rubber to construction materials to fishing equipment to clothing to sanitary products to whatever so that we can better understand what’s happening," West said.

That knowledge will better help the group create strategic public messaging about trash pollution or even be used in lobbying efforts to, for example, ban single-use plastics, which are breaking down into tiny pieces, commonly referred to as microplastics.

"While we can remove the larger pieces of trash if there is a cleanup like this or people are out there trying to clean up on their days off, microplastics we have no way currently," said Katie Senft, a staff research associate at the University of California, Davis, Tahoe Environmental Research Center. "There is no technology to remove them from the water. Once they’re there, we’re kind of stuck with them forever."

Senft is one of the lead researchers on a project examining microplastics in the lake, which is famous for its crystal clear water. She's trying to determine where those microscopic fragments of plastic end up after getting in the water.

"Lake Tahoe is a source of drinking water for thousands of people in the area," Senft said. "There’s a chance that we could be consuming microplastics in our drinking water."

UC Davis researchers are currently looking into that possibility, taking samples from two municipal water sources in the Tahoe area as part of their examination. The final results are expected in about a year.

Senft did point out that more and more people appear to be getting on board when it comes to dumping their trash where it belongs instead of in the lake.

"One of the really interesting things that I found is there’s a lot of kind of more historic trash, at least in the way of aluminum cans," she said. "So, you’d see a lot of pull-top cans in the lake, but you didn’t see as many more modern cans. What that kind of says to me is there is a lot of trash in the lake. I think it’s accumulated there, obviously. No one’s ever done an underwater cleanup in Tahoe before. But I do think that the attitude around trash in the forests, in the lake has changed. I think historically maybe people kind of thought of Tahoe as like a trash can."

That growing interest in protecting the environment can be seen in the wave of support that has washed over Clean Up The Lake since it decided to take on the 72-mile cleanup. West said over 300 certified scuba divers have applied to participate, not to mention the hundreds of others who have expressed interest in helping out in whatever way possible.

"I was getting a call from a boat captain while I was watching Netflix in bed last night," West said with a laugh. "Everyone’s super excited for the project."

Numerous companies and foundations have also jumped in. Tahoe Blue Vodka offered a donation match up to $100,000. That amount was reached and surpassed in about 10 days thanks to the efforts of nonprofit Tahoe Fund, which ended up collecting donations from over 150 donors, Tahoe Fund CEO Amy Berry said.

"What I love about this project in particular and why we decided to sponsor it in such a big way is that it provides real immediate, measurable, tangible results," said Matt Levitt, Tahoe Blue Vodka's founder and president.

"It was really inspiring to see the community get it," Berry said. "They understood, ‘OK, this is a really tangible problem. [West] has the solution. Tahoe Blue Vodka is putting up the match.’ Everything just kind of came together."

The support, both in terms of funds raised and backers who signed on, took West by surprise.

"Definitely never would have expected all the support that we’ve had," he said. "That support allowing the attention to the issue is, I think, what’s most important. From there, it’s just amazing seeing what we’re all capable of doing."

After the trash is pulled out of the lake, counted and categorized, Clean Up the Lake and its partners plan to reuse as much of it as possible.

"I’ll have some fun, resurrected sunglasses coming out, in partnership with the sunglasses company, that we’re going to replace the plastic lenses with glass," West said. "And then we’re working with Tahoe Fund to do an art series from the trash that we’re pulling out from under water."

In the meantime, even those not directly participating in the cleanup can do their part to keep the beloved mountain lake and surrounding forest pristine.

The simple act of collecting one's trash, even just one piece, and disposing of it properly can go a long way in maintaining Tahoe's beauty and health.

"If you need a little motivation to pick up that one plastic water bottle, tell yourself that you’re picking up a million pieces of microplastic," Senft said. "Just by removing that one plastic bottle, you’re making a huge difference further down the road."