‘The Luckiest Guy in the World': Shark Attack Victim Speaks Out as Beaches Reopen

Beaches in the Pacifica and Montara areas of San Mateo County reopened Monday, two days after a shark attack triggered a full closure.

On Saturday, a six-foot great white shark bit Nemanja Spasojevic of San Francisco in the leg as he swam near Gray Whale Cove State Beach. Spasojevic was treated and released from the hospital and is now recuperating at home.

“I['m] probably the luckiest guy in the world, to get hit by a great white and walk out of the hospital the same day,” said the 38-year-old, who has a slight limp and 10 puncture wounds in the back of his thigh.

“He didn't thrash my leg. Gentle bite, let go,” said Spasojevic. “I could feel mosquito bite-like feeling and slight push; as I look I could see nose and two eyes.”

Not wanting to come face to face with the shark again, the marathon swimmer said he headed to shore as close to the rocks as possible.

Beaches in the Pacifica and Montara areas of San Mateo County reopened Monday after a weekend shark attack kept gates closed and visitors away from the water. Robert Handa reports.

“Just kicking frantically to white water, making sure my fins are pointing down so if I get hit again it bites fins, not legs or arms,” he said.

He made it to shore to find his wetsuit filling with blood and realized his plan to hike up steep sets of stairs to his car and drive for help was out.

On a nearly empty beach, Spasojevic managed to get the attention of fisherman Thomas Masotta, who was somehow able to get cell reception, call 911 and guide first responders to the beach.

Paramedics carried the 220-pound patient up those stairs and got him to SF General.

“So many people helped me out, super grateful — and the shark if it was not gentle, I wouldn't be here standing," said Spasojevic.

He said he's grateful to be walking around San Francisco with his wife and ready to head back into the ocean when doctors give him the OK.

Nonprofit group Shark Stewards, which is dedicated to protecting sharks and their habitat, said there are more young white sharks moving north toward the Bay Area.

"I think the recent trend is really this increase in sea surface temperature and this is probably likely an effect of global warming," Shark Stewards Director David McGuire said. "These young sharks tend to stray north and stay near shore in the shallow waters."

Shark Stewards also pointed out that the Bay Area has a thriving population of seals and sea lions right now. Surfers and swimmers sometimes get mistaken for the sharks’ favorite food.

"If there’s a shark sighting, you’re kind of more cautious just naturally, even if it’s a few miles down the road," surfer Patrick Co said. "Their range is pretty big, so you’re always wondering about that." 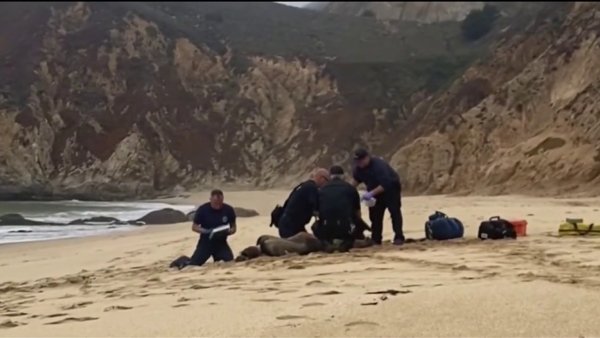 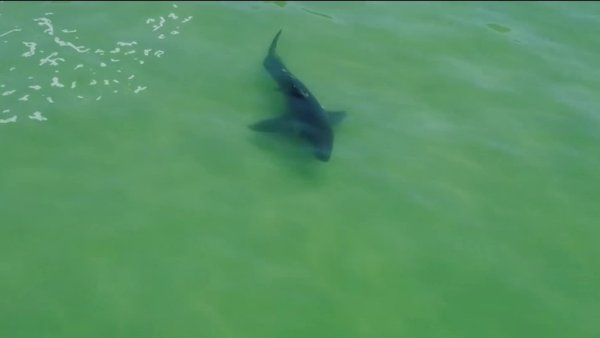 While Gray Whale Cove reopened Monday, there weren't too many people at the beach. Visitors who were there were well aware of Saturday's attack.

"I was surprised," Joel Rodriguez of Fremont said. "I’ve never seen one actually come this close to where I usually go hiking or any of that stuff. So, it’s kind of surprising to me."

Drone video of a white shark swimming in the same waters was captured two weeks ago.