Monkeypox FAQ: What to Know, Vaccines, Update on Outbreaks

Monkeypox continues to spread across the world as health officials struggle to meet the high demand for vaccines.

The virus in July was also declared a global health emergency by the World Health Organization.

Below are answers to commonly asked questions about the virus, including information about symptoms, how the virus is spread and what to know about vaccines.

The monkeypox virus comes from the same family of viruses as smallpox. The two viruses present similar symptoms, including fever, headaches, muscle aches, chills, exhaustion and lesions that begin on one site and spread across the body. Monkeypox is usually milder than smallpox and may also cause swollen lymph nodes, according to the CDC.

Infections typically last two to four weeks and although other strains of the virus have had a fatality rate up to 10%, the current outbreak is rarely lethal.

Where are monkeypox outbreaks reported?

There have been monkeypox outbreaks around the world, predominantly in Africa, since the virus’ discovery in 1970. But this is the first time clusters of cases have appeared simultaneously in five World Health Organization regions, with over 3,000 cases reported in the first half of 2022.

This global monkeypox outbreak has prompted plans to rename the virus, as the name implies geographic ties to Africa that are inaccurate and "discriminatory and stigmatizing," according to WHO officials.

The CDC reported that this outbreak involves a high number of cases in men who have sex with men, but health officials stress that anyone can contract the virus.

WHO recently declared monkeypox a global health emergency, given the unprecedented global spread of this outbreak.

What are the symptoms of monkeypox in humans?

Traditionally, people with monkeypox have developed a fever, swollen lymph nodes, headaches and muscle aches, followed by a rash that starts on their face or in their mouth then spreads to other parts of their body — particularly the hands and feet.

Now, patients are first experiencing a rash in the mouth or around the genitals or anus. And instead of widespread rashes, some patients are seeing patches of lesions in areas other than the face, hands or feet. What's more, the lesions usually start flat and progress to fluid-blisters. But in recent cases, lesions are appearing at different stages within the same area of the body.

In some cases, flu-like symptoms developed after the rash, but other people didn't have those symptoms at all. Other reported symptoms include pain in or around the anus and rectum, rectal bleeding, proctitis (painful inflammation of the rectum lining) or the feeling of needing a bowel movement even though the bowels are empty.

How is monkeypox spread?

The virus is primarily spreading through close physical contact during sex, and currently men who have sex with men are the highest risk of infection. About 99% of monkeypox patients in the U.S. are men, and 98% of the 309 patients who provided demographic information identified as men who have had sex with men, according to the CDC.

Monkeypox is not classified as a sexually transmitted disease

There are two FDA-approved vaccines available to individuals exposed to monkeypox.

The CDC is recommending vaccination for people with confirmed or presumed monkeypox exposures as well as people at high risk of infection.

We already have vaccines and treatments approved for monkeypox

What vaccines are available for monkeypox?

The FDA approved the two-dose Jynneos vaccine in 2019 for people ages 18 and older who are at high risk of exposure to monkeypox or smallpox.

The Jynneos vaccine is made by the Danish biotech company Bavarian Nordic. The FDA had to inspect and sign off on a Bavarian Nordic plant in Denmark to ensure the shots met quality standards. Doses were shipped to the U.S. while the FDA conducted its review in July and can now be distributed to local authorities for use.

Vaccination with Jynneos should begin within four days of exposure to monkeypox to have the best chance of preventing disease onset, according to the CDC. The two doses are administered 28 days apart. If the vaccine is administered between four and 14 days after exposure, the shots may not prevent disease but could reduce symptoms.

The U.S. also has more than 100 million doses of an older generation smallpox vaccine called ACAM2000 that is likely effective at preventing monkeypox, but ACAM2000 can have serious side effects. It's not recommended for those with weak immune systems including people who are HIV-positive, pregnant women, and people with eczema and similar skin conditions.

Where can I get the monkeypox vaccine?

The monkeypox vaccine continues to be in short supply, with clinics struggling to meet the high demand for doses. Some lawmakers and local officials have blasted the federal government for its response to the outbreak and rollout of the vaccine.

In San Francisco, a monkeypox vaccine clinic at Zuckerberg San Francisco General Hospital reopened Aug. 1 after a week-and-a-half closure because of a vaccine shortage. The city is scheduled to receive more than 4,200 vaccines on the week of Aug. 1 and will begin distributing them in clinics throughout the city.

While most clinics in San Francisco are by appointment only, the one at SF General accepts walk-ins. The clinic has seen long lines, and the same is expected when it opens as vaccine supply is limited at that location as well.

The California Department of Public Health on its website also breaks down where it has distributed the vaccines and the amount of doses.

For more information on vaccine availability in your area, contact your local health department.

Here are links to Bay Area counties and their latest information on the monkeypox vaccine:

The U.S. has ordered 5.5 million more vaccine doses for delivery by mid-2023 and has rights to the raw ingredients that could make 11.1 million more doses. U.S. officials said a massive vaccination campaign could still be avoided if communities and individuals take measures to avoid spread.

Why is monkeypox considered a global emergency?

A global emergency is World Health Organization’s highest level of alert, but the designation does not necessarily mean a disease is particularly transmissible or lethal. Similar declarations were made for the Zika virus in 2016 in Latin America and the ongoing effort to eradicate polio, in addition to the COVID-19 pandemic and the 2014 Ebola outbreak in West Africa.

“We have an outbreak that has spread around the world rapidly through new modes of transmission, about which we understand too little,” WHO Director-General Tedros Adhanom Ghebreyesus said in July.

Why did the United States declare monkeypox a public health emergency?

The Biden administration declared the monkeypox outbreak as a public health emergency on Aug. 4.

The declaration could facilitate access to emergency funds, allow health agencies to collect more data about cases and vaccinations, accelerate vaccine distribution and make it easier for doctors to prescribe treatment.

Why did San Francisco declare a public health emergency for monkeypox?

San Francisco officially declared a public health emergency for monkeypox on Aug. 1 after seeing a significant spike in cases.

Officials said they declared a public health emergency primarily to raise awareness and help educate people who might come into contact with the virus about how to protect themselves.

San Francisco-specific information regarding monkeypox testing, treatment and other resources can be found at sf.gov.

San Francisco city officials provide an update after the monkeypox outbreak prompted them to declare a local public health emergency in the city Thursday. 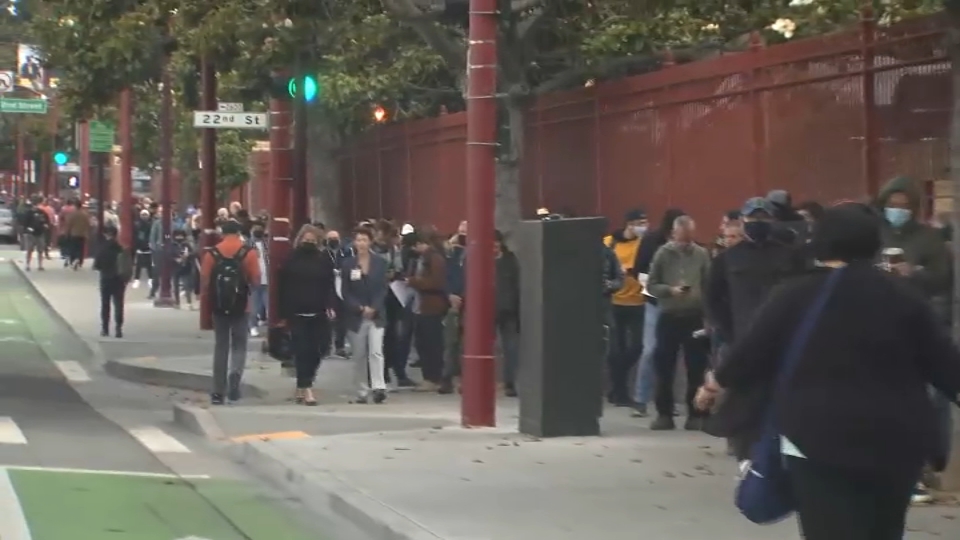 In Race for Monkeypox Vaccines, Experts See Repeat of COVID

The Associated Press, CNBC and NBC News contributed to this article.