Protesters on Monday rallied in support of two homeless moms who took over a vacant house in Oakland and are now facing eviction after a judge's ruling last week.

The mothers, part of a group called Moms4Housing, lost their legal battle to stay in the house on Magnolia Street owned by Wedgewood Properties, and a judge last Thursday said the Alameda County Sheriff's Office would be evicting the women within five business days.

"We are prepared to not leave; we will not resist, we are not resisting, but we will practice nonviolent civil disobedience," Walker said.

Wedgewood offered to pay to shelter the women for the next two months, but the women called the offer an insult and continued to say "The moms, and the community behind us, will not leave the property."

Wedgewood has said it is working with nonprofit Shelter 37 to renovate the house using at-risk youth. But Oakland City Council President Rebecca Kaplan, who was among the Moms4Housing supporters, said the company has a "troubling history" and there is no evidence it is serious about launching the project at the Magnolia Street house. 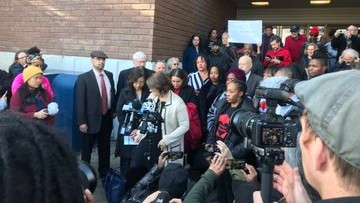 "Wedgewood owns and buys hundreds of houses. Yet, thus far, they have not offered any of their other properties into the program they claim to be launching," Kaplan said in a statement. "Wedgewood has stated they would then sell the house and send a portion of the proceeds to groups in Los Angeles, leaving no benefit to the local community."

The protesters vowed to be at the property until 6 p.m. Monday, standing arm in arm to create a barrier between sheriff's officials and the moms inside.

Moms4Housing said this is the start of a new civil rights movement, adding that politicians have reached out to the group, including someone from Sen. Bernie Sanders' presidential campaign.