Family members of a woman shot to death on San Francisco's waterfront earlier this month, allegedly at the hands of a Mexican national who had been deported multiple times,will speak at a U.S. Senate Judiciary Committee hearing on Tuesday.

The hearing, requested by Sen. Chuck Grassley, R-Iowa, was scheduled to identify potential public safety issues stemming from the county's immigration policies. It comes three weeks after the death of 32-year-old Pleasanton native Kathryn "Kate" Steinle, who was fatally shot on July 1 while walking on Pier 14 with family members in broad daylight.

Grassley has invited the head of U.S. Immigration and Customs Enforcement, as well as the director of U.S. Citizenship and Immigration Services, to testify Tuesday after members of the Steinle family have had a chance to address the senators. 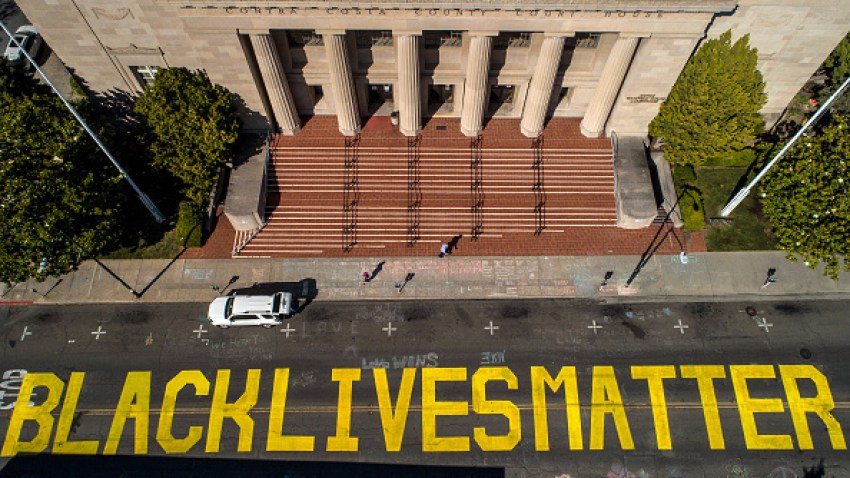 Martinez Black Lives Matter Street Mural to be Paved Over

Within an hour of the shooting, police arrested Juan Francisco Lopez-Sanchez, an undocumented immigrant who had been deported five times and has seven prior felony convictions, including four involving narcotics.

Lopez-Sanchez was released from San Francisco County Jail in April despite a request from ICE personnel asking the sheriff's department to detain him so that ICE field agents could take him into custody and carry out Lopez-Sanchez' sixth deportation.

The San Francisco Sheriff's Department's refusal to hand Lopez-Sanchez over to ICE has prompted a national conversation about public safety hazards under current immigration policies.
Sheriff Ross Mirkarimi and sheriff's department attorney Freya Horne maintain that cooperating with the ICE request would have violated San Francisco's Sanctuary City and Due Process for All policies, as well as the Fourth Amendment of the U.S. Constitution.

Mayor Ed Lee has said that he wants the city to cooperate with ICE in the future.

Mirkarimi said his department could only cooperate with the ICE requests if the city's laws change. Mirkarimi has subsequently called on the Board of Supervisors to hold a hearing to discuss the policy issue.

Immigrant rights activists, however, say that requiring local law enforcement to comply with ICE requests has been ruled unconstitutional in federal court.

Activists say such policies threaten the trust that local law enforcement agencies have built with immigrant populations, who previously have chosen not to report crimes or cooperate with investigations in fear of being handed over to immigration officials.

Immigration activists also argue that Lopez-Sanchez does not represent all U.S. immigrants and that he instead represents someone with potential mental health issues and a possible drug addiction who has not received the help he needs.

But Republican U.S. senators, including Grassley, the chairman of the Judiciary Committee, have said that San Francisco's sanctuary policy allowed Lopez-Sanchez to walk the streets.

Grassley said he found it disturbing that government documents showed more than 8,800 detainer requests issued by ICE were declined by local law enforcement agencies in 43 states during a nine-month period last year, and that 62 percent of the declined detainers were associated with individuals convicted of crimes or individuals who "presented some other public safety concern."
He said, "San Francisco isn't the only one to shoulder blame here," arguing that the Obama Administration is also at fault. He maintains that the Obama Administration has not addressed local law enforcement policies that contradict U.S. immigration policies.

The Department of Homeland Security has launched Priority Enforcement Program (PEP), a new policy seeking to cure probable cause issues surrounding detainers by requiring ICE to ask local law enforcement agencies for notification of an individual's release date, instead of detainers, so that immigration officials can arrest, detain, or remove undocumented immigrants.

Some Republican senators have criticized ICE for not requiring local agencies to participate in or comply with all aspects of the new program.

Tom Manger, president of the Major Cities Chiefs Police Association and chief of the Montgomery County Police Department in Maryland, said it is important to strike a balance. He said Montgomery County, unlike San Francisco, is participating in PEP and said he is optimistic that it won't interfere with local law enforcement's relationship with the immigrant population.

Grace Huang, public policy coordinator at the Washington State Coalition Against Domestic Violence, said that any new immigration policies must be sure to keep law enforcement accessible to undocumented immigrants.

"When victims are afraid to come forward, reach out for help, it means more people in our community are at risk and we all suffer the consequences," Huang said.